What's the fuss about the Social Security Fund in Nepal? 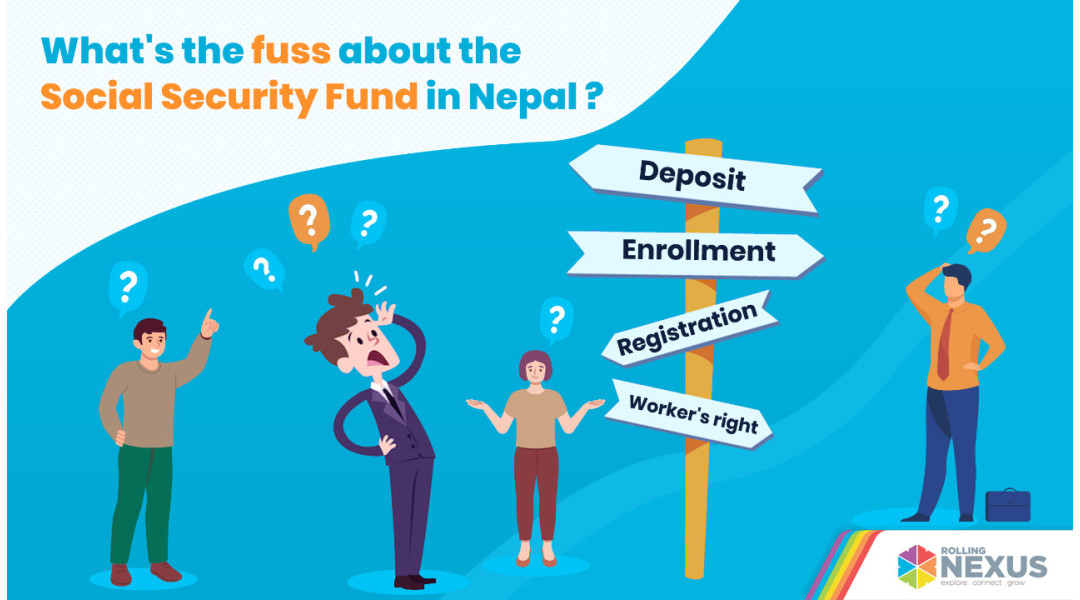 Social Security Act Nepal was introduced to be commenced immediately by the Federal Parliament as a measure to make the required provisions for the protection of the right to social security of the impoverished citizens, vulnerable single women, people with disabilities, children, citizens who are not able to take care of themselves and citizens who belong to the ethnic group on the brink of extinction, by conforming the constitution.

The Social Security Fund (SSF) was started for the function and management of social security of the employees.

We have heard about Social Security programs running in developed countries like the USA. So it makes sense when Nepalis were happy about the Social Security Fund being established. The government’s target is to provide almost 3.5 million people with a complete welfare package in a national campaign to guarantee the social security of private-sector workers. But, this is more to that.

The initiation was lauded by both labour rights organisations and the private sector as it was a necessary action towards honouring labourers. The program does look progressive on the outside as it was initiated to secure and protect employees of private sectors whose well being and welfare has been a topic of concern for many for a long time. But, the happiness didn't last long and the program hasn't set out to achieve what was expected of it at the beginning.

Let's find out about the journey of the Social Security Fund in Nepal since its inception to amendments and how the tripartite have embraced the scheme so far or not.

Contributors of the Fund

There is also Social Security Tax amassed up to this point in time and to be collected in the future along with the national level “Kalyankari” Fund as an incentive.

Attractions of the Social Security Fund

The fund braces all the monetary toll of job-related diseases for workers after they have contributed for two uninterrupted years. In case of accidents outside the workplace, workers will be given a maximum aid of Rs700,000.

The worker’s family members also receive some type of financial coverage for their lifetime in case of the worker’s demise. The worker’s spouse receives a monthly pension equal to 60 per cent of their basic salary of the last job for the course of their life.

The aim of implementing the Social Security Scheme is to make sure that workers’ rights are protected and that they do not have to face any kind of discrimination in the long run.

Steps to sign up and contribute to the scheme

Employers need to initiate the registration process to get enrolled. Once the employer has registered and submitted details of their employees then the workers can sign up and start contributions.

Workers will receive a unique social security number and an identity card after they are enrolled. The good news is that the same number and identity card will work even if employees change jobs. Registered workers are only entitled to the schemes once both the employers and workers have contributed to the Social Security Fund as required.

According to the working policy, an amount equivalent to 31 percent of a worker’s basic salary - 11 percent subtracted from the worker’s monthly salary and 20 per cent employer’s contribution is deposited to the fund.

Out of the entire monthly contribution, 1 percent goes to medical treatment, health protection, and maternity scheme; 1.40 per cent to accidents and disability plan; 0.27 per cent to the dependent family plan; and 28.33 per cent to the pension or old-age security scheme.

The accessibility to the entitlements are conditional

For a woman or a male worker’s wife to access maternity coverage, workers should have deposited some portion to the fund every month for at least twelve months (in 18 months.) Maternity support coverage is inclusive of regular pregnancy tests, hospital admission, surgery, and three months of full treatment for the newborn. The support also comprises of one month of basic salary for the care of the mother, financial support in case of miscarriage of a 24-week baby or stillbirth.

If the workers have contributed for 15 years and attained 60 years of age, they will be entitled to the pension plan. As stated by the scheme’s running officials, if the workers turn 60 but have not contributed for 15 years then they will get all the money deposited back with interest. Although, workers joining the service from this fiscal year must go for the pension plan.

Low turn out of SSF since its launch

As it turns out the SSF was disappointingly low subscribed even with the favourable provision and services. Since its inception, a total of 10,477 employers and 115,606 workers have registered with the Social Security Fund Secretariat - the body that confirms the protection of social security rights and oversees the fund.

The board has disclosed that the progress was below the target when the registration deadline expired in mid-October. The aim was to bring in at least 45,000 to 50,000 private sector firms under the scheme but the achievement was extremely low.

As claimed by a preliminary report of the National Economic Census-2018, almost 900,000 private firms, factories, business establishments, and service providers are running in the country. But that data was disregarded by the Social Security Fund saying that many of them are simply registered but don’t function.

Slow response and the slower result of SSF

Enrolment in the scheme remains inactive given the huge publicity from the government and celebration by labour rights organizations and employers. This slowness has compelled the government to extend the registration deadline by a month.

The possible reasons are that the employers have not been enthusiastic about joining the schemes and the employers and other targeted parties do not have adequate information about the scheme and its benefits and so on.

Although, the setback from implementing social security schemes is said to be a normal thing because of the newness of the program in our country. The authorities further add that it could likely take some decades to fully execute the program in Nepal.

Also, employers have deviated from committing to the scheme and the government has not been successful in clearing the confusion about the program to protect the private sector workers.

While all three parties - the government, workers and private sector employers had considered the program as a milestone for the welfare and safety of the workers, their elation towards carrying out the commitment grew fainted and the unsatisfactory registrations do make it obvious.

The Social security Fund was thought to be uplifting according to some private-sector employers but meanwhile, they would prefer it to be optional. Similarly, they want more time for enrolment since not all workers are fully familiar with all the terms and conditions of the program. Plus, the deposited money is held for a long time is also a concern.

Industries and firms are asking for more time and some contributions from the government respectively. Numerous employers have demanded phase-wise implementation of the scheme.

The people are happy but mostly confused

The insufficiency of genuine details about the government scheme has put the workers in some sort of a predicament. They are mostly worried about not being able to take the money out in times of hardship. Workers who have already deposited their money in pension and gratuity schemes are discombobulated even more.

The government has updated the scheme after the stagnant response from the public. The government is preparing plans to provide loans to the contributors. Workers can get a loan of up to Rs. 10 million with the changes that have been put forward. Registrations will be outpouring as the new changes in the scheme draw the attention of both employers and workers.

The private firms and organisations that were unwilling at the beginning have started to agree with and support the scheme shortly after the loan schemes were out. Cooperatives, banks, private schools and NGOs have reconfirmed their allegiance to joining the scheme.

The contribution-based Social Security Fund has been acclaimed as beneficial for all targeted parties, mostly workers and employers. The scheme is anticipated to strengthen the labour relationships as well. The employers won't have to encounter any difficulties should any tragedies occur because the workers will be getting support from the fund. Hence, this sums up the journey of Social Security Fund in Nepal thus far.