The Immense Boon of Being a Woman 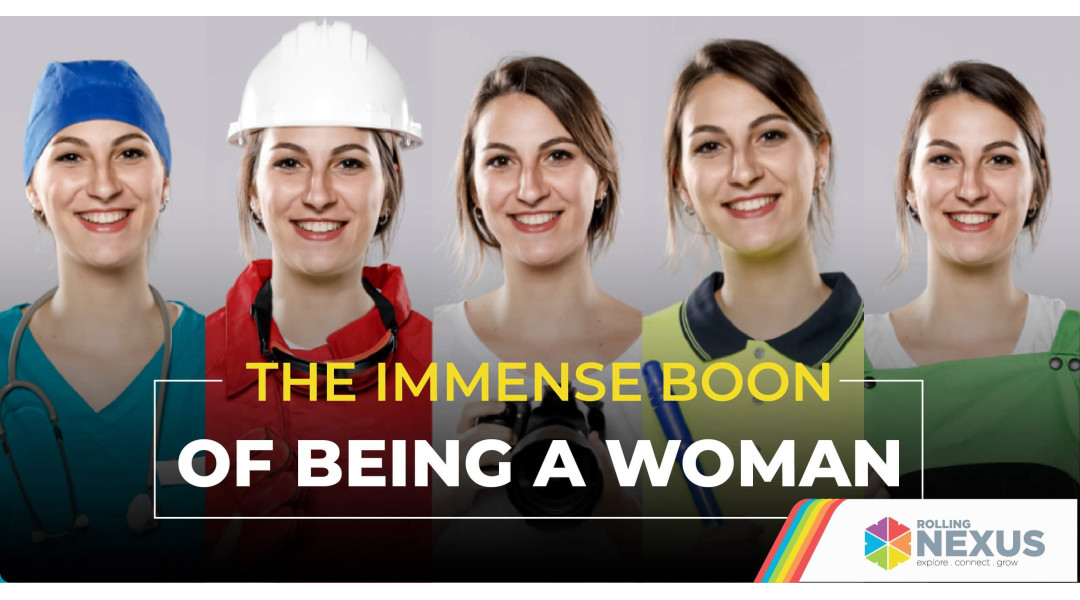 An epitome of BEAUTY, totem of RESPONSIBILITIES, cornucopia of LOVE, and synonym of SACRIFICES, the word ‘woman’ is the amalgamation of these all. One of the most beautiful creations of Mother Nature is a Girl who thrives to grow up as a woman. When talking about gender preferences, most of the people in the past did want sons as their successor coining as valuable assets for the family whereas daughters as the unwanted liabilities due to gender discrimination and deep-rooted societal norms but time has taken a great leap. It’s time to live in equality and lead the world together!

In rural areas and many backward societies, being born as a daughter is often termed as a burden for the family as there is a misconception that sons only are the sole sources of income for sustainable livelihood. Furthermore, due to the culture of the Dowry system, daughters were treated as a burden rather than a boon. Thanks to the flourishing educational system and change in conservative thoughts of negative-minded people, such conceptions are being erased at the rabbit's pace now. To sum up, now people understand that girls and boys, men and women are the two sides of a coin. With the absence of one’s participation, there will always be chaos in the world.

From the beginning, women were assigned to unpaid care work including household chores around the homes such as cleaning, cooking, washing clothes, fetching water and firewood, providing care to children and elderly and sick of the family. There has been a stricken stigma across societies and cultures that the responsibility of care work is considered to be of women and girls only. After many years of change, education, and positive beliefs, women are now able to be independent on their own. Despite the ill-minded thoughts of society, the positive “change” has immersed and now women are the ones who can run this world.

Legend of Mother Sita from Ramayana, a tale of Mahadurga Bhawani, and many more ancient stories also depict how many sacrifices women can make, a woman can be fierce at a time, how much countless love and affection she can deliver. It is a true blessing to be born as a girl child and being a woman with uncountable peculiarity is a real boon. Jacinda Ardern, Prime Minister of New Zealand is the prime example of the power of women. Finland got just ranked the happiest country in the world in 1st position due to the extensive welfare benefits, low corruption, well-defined democracy, and many others, and the country is run by the female-led government.

Famous caregiver in the world, Mother Teresa, inventor of the windshield wiper, Mary Anderson, authors of blockbuster books like “Twilight”, “Harry Potter”, “The Hunger Games”, inventor of Globe, Ellen Fitz, these all are the women who broke the stereotypes of conservative thinking that women are just the full-time working lady who dedicates their entire time caretaking the house and the family. In fact, this 21st-century sophisticated society needs creative women and men hand in hand for more developments in all sectors.

Is it really a boon to be a woman? A BIG shout out to the activists and the positive-minded people who continuously fought for equality and education. The women were bound to be caged inside the four walls doing household chores only in the past and they were restricted to flap their wings to do on their own, to stand on their own feet, and to live their lives to the fullest. And the time has revamped now the women are leading the big corporate houses, hospitals, and country too.

In the role of Mother, sister, grandmother, wife, daughter-in-law, and many more, women play and flaunt significantly to fulfill the responsibilities. Even research admits that women are great at certain things which exhibits that being a woman is a real boon. Some of the facts presented are:

Changemakers are those who dare to dream and make it a reality. Madam Curie, Florence Nightingale, Pink Floyd, Lady Gaga are just a pinch of names in the list of women who dare to dream and reach the peak of success. They prove that being a woman is not a burden but it is a real boon to be a woman, to be a changemaker. Now it’s time to empower every woman who is chained inside the barriers of four walls with the death of hopes of living life. Emancipating the women from the various portmanteau of social, economic norms and discrimination should be done for an equal and peaceful world.

Kick-starting the right values and education from homes are the best methods to flourish the message of the need for equality. In nutshell, being a woman is being true-self persona and there is nothing a Big BOON like!