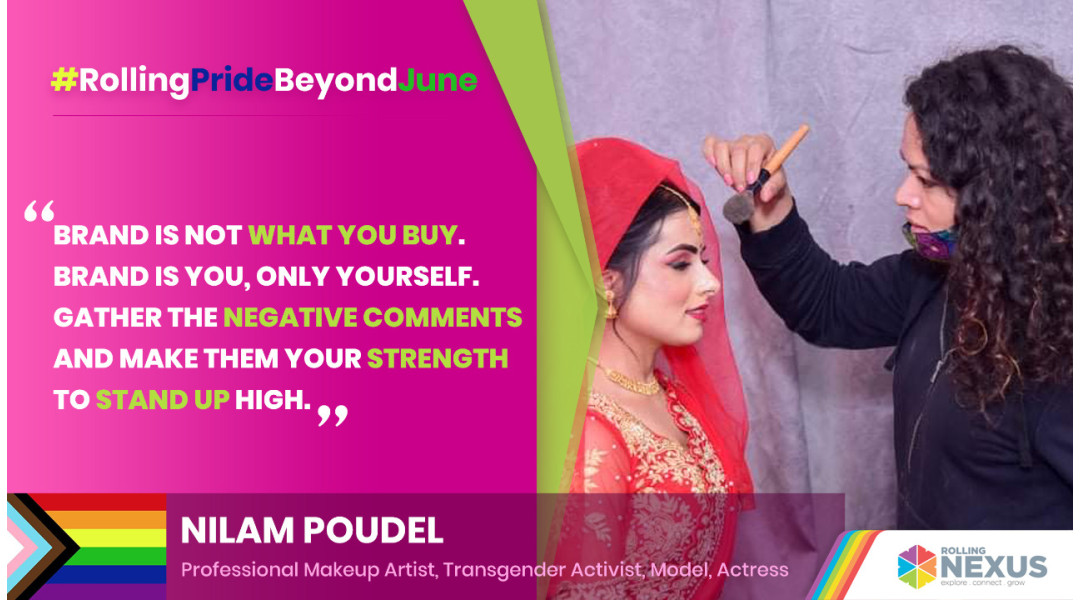 “If I wait for someone else to validate my existence, it will mean that I’m shortchanging myself.” – Zanele Muholi

Nilam Poudel is a professional makeup artist, transgender activist, model, and actress who has portrayed beguiling performances in movies, web series. She also gives motivational classes and has conducted numerous fashion events, shows and runaways too.

Rolling Nexus under the initiative of #RollingPrideBeyondJune features Nilam Poudel to understand 4Es - Employment, Entrepreneurship, Empowerment and Engagement from her perspective and overall to learn about her lived experience as a trans woman. Check out the conversations that follow:

What does empowerment mean to you?

Empowerment does not only mean providing job opportunities to the people. I believe that empowerment is to identify and represent the capabilities and potential of oneself.

Why do you think it is difficult for trans people to find employment opportunities?

I wanna say that elephants have two sets of teeth, one to show off and another to chew. It’s the truth that when one is succeeding and working towards their goals, society always tries to pull them down instead of encouraging them to move forward. The non-acceptance of trans people in society is the main reason behind having limited employment opportunities for the trans community. Most people say that we are all equal but when it comes to providing jobs or space to the trans community, there is no implementation of the words.

When we go to any shopping centre, we don’t see any trans woman working as a salesgirl. Even no trans person is working as a clerk in any airport. Nobody provides even a desk for trans people. Many NGOs are raising their voice for the LGBTQ+ community but when there’s time to attend sessions, meetings with people like us, they won’t even provide a desk for us. Still, the concept of people regarding the trans community hasn’t been clear because everyone is judging us like prostitutes who sell their bodies only. They don’t analyze and oversee our capabilities but they judge us by looking at our bodies.

The representation of trans individuals in entrepreneurship is very little and oftentimes do not get the support and appreciation they deserve. How can the government and responsible figures help queer individuals such as yourself for better entrepreneurial and employment opportunities?

First of all, rather than making laws or policies, inclusive participation is not implemented in the first place due to which opportunities can't be generated. Even in any programs organized by government organizations, we are not invited to speak up about anything. In my view, opportunities should be given first instead of making policies only.

We are capable. We are educated. If even one job offer is provided to trans people like us, it will be very good. If we are included actively in any programs of the government sector, it will be far better than making new policies. We are usually unaware of the programs related to the LGBTQ+ community held by the government and responsible figures.

Is there fair treatment and respect in the makeup industry for trans people like yourself?

Every coin has two sides. Respect is earned. If you want respect, you have to give respect back. You can’t buy respect, you need to earn it. So, I want to answer this question in two ways.

Whenever I am in the shoot, I barely talk to everyone else and some tell me on my face that I am selfish, but it’s not necessary to do unusual gossip and all. During my starting phase, I would cry because I would arrive home late due to late-night shoots, and when I would check my phone then there would be messages from some people from the same team crew asking about how much I charge. Maybe it's because of my hard work and dedication, people tend to judge my body structure and sexuality. We can predict from body language how people treat us and see us.

What do you think is needed to encourage more trans people to start their entrepreneurship ventures?

I have seen many trainers from different organizations who come to provide training to us, but they teach us the serious matter for some days and leave it all to us to do everything which is not good. Personal interactions about work and the methodology should be done while giving training as it brings a greater impact on learning. Fruitful training should be given to us in my view.

What struggles did you have to face while looking for employment opportunities?

I have shared my struggles in my interview which is available on YouTube too. I came from a poor and middle-class family who entered this town knowing few people only. My trans life began after I opened up about my true identity. I started wearing traditionally feminine clothes with short hair, mascara, and touch upon the face. When I would go for job interviews, interviewers would stare at my body instead of going through my resume. Then they started some conversations regarding the job, and after some time, they would shift the conversation by replying “we can’t give jobs to people like you.” That was probably 11 or 12 years ago.

Looking back, my starting phase was indeed bad. I used to cry often during music video shoots. There was no time for lunch, and I would return home late, and nobody would even offer a glass of water at that time. Such behaviour would hurt a lot given how we would work so hard on hungry stomachs.

People have called me slurs and used derogatory language when I would travel in vehicles to go for job interviews. Getting physically harassed would pinch me a lot at that time. But I powered through those struggles and turned them into strengths, and kept moving forward, and now I have created my name in society. I never gave attention to the negativity. I believe that you shouldn't compromise your goals by focusing on negative comments.

Is there any change that you have noticed in the makeup industry something that makes you hopeful about the future perhaps?

There have been a lot of changes in this field. Before, there used to be a problem of returning home late by yourself and especially girls have to bear a lot of problems such as being followed by strangers late at night, walking lonely in the dark, etc. But now we can feel the changes here. Now there is not only a single makeup artist in the set. There are different makeup artists, hair stylists but in the past, these works had to be done by a single person. This has reduced the workload for a single person.

I hope in the coming days there will be more advanced facilities like timely pick and drop, food, etc. And payscale should be given as per the work as well. Many people come and request to do their make-up for free for friendship, but I have stopped doing that. Yeah, we can do that at our starting phase, but routinely purchasing the required items from your pocket is not good.

We need effective and standard pay rates. I have felt that I sometimes did not receive a single penny or timely payment because of my gender identity. If I don't get paid on time, then such thoughts would provoke my mind. Any amount of money is a big deal because that is the fruit of your tireless efforts. So I believe we should be paid on time.

I want to add one important thing here. Movies do have a lot of impacts on our lives. It's high time that we end the portrayal of LGBTQ+ characters for comic relief only. Movies should showcase the LGBTQ+ community with respect and dignity. The LGBTQ+ characters in movies need to have stories and character development. If there is a portrayal of a trans person working as a sex worker, then the movie makers should also show the struggle behind such work. Movies should depict LGBTQ+ characters in ways that can help bring a positive social message to society.

Nowadays, children learn most things from TV and visuals. The genuine and correct representation of trans people will help the younger generations to acknowledge trans lives. Hence, the responsible parties should stop the negative portrayal of the trans community and showcase trans lives and struggles in the right way. And that will further help change the mindset of people.

Where do you see yourself in 10 years?

I hope that I will have a beautiful and happy family. I want to do a lot of social work in the coming years. I have recently started a Fashion Show with my name, Nilam’s Runaway. I want to establish that brand as a successful one, raising hopes among the people that your sexuality and gender identity should not hinder you from reaching your ambition and dreams.

I want to provide employment opportunities to people who aspire to be models from and outside the LGBTQ+ community. I want to run modeling classes for people. And I want to travel and explore more in many different countries.

Any message you want to convey?

I will not let the mistreatment stop me from moving forward. But, I want the hate and the discrimination to stop. Let's end it together. Life is full of struggles, but there is happiness too. So, be patient and take your time. After every night, there comes a shining day. Make wise decisions. Be proud of who you are. And pat yourself on the back sometimes because you made it.

Do not let peoples' words discourage you. Always move towards your destiny. You are beautiful the way you are. You are a brand yourself and not the brand you buy. It depends on how you carry your brand. Never compare yourself with others. Moreover, stop comparing yourself with people on social media.

We all are human beings. Treat everyone equally. Do not judge anyone based on their color, caste, creed, or sexuality. Unleash your true potential and achieve so that when you look back at yourself, you can say to yourself that “I truly did it.” 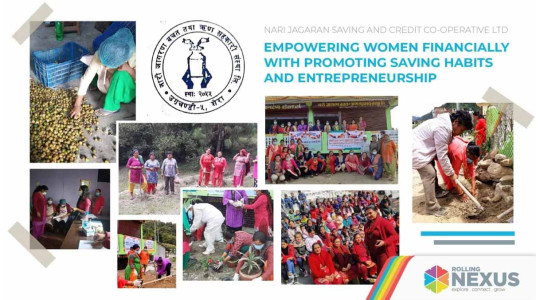 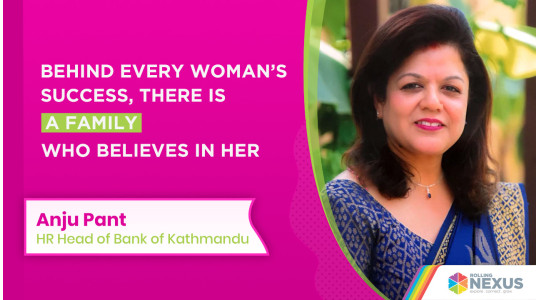 Behind every woman's success, there is a family who believes in her 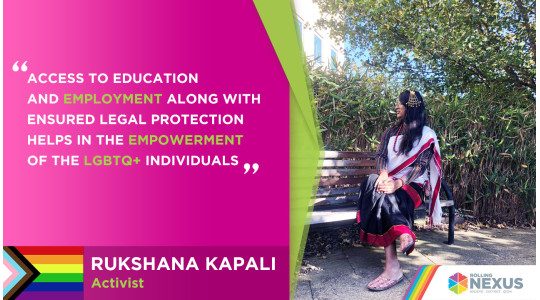 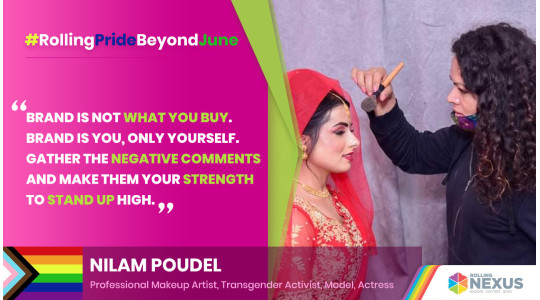 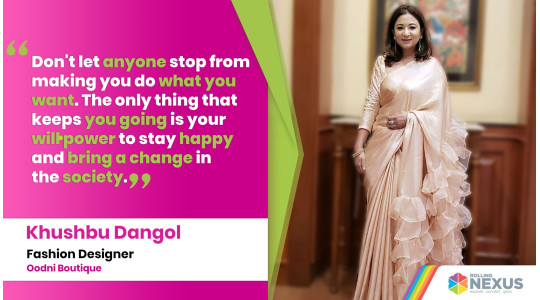