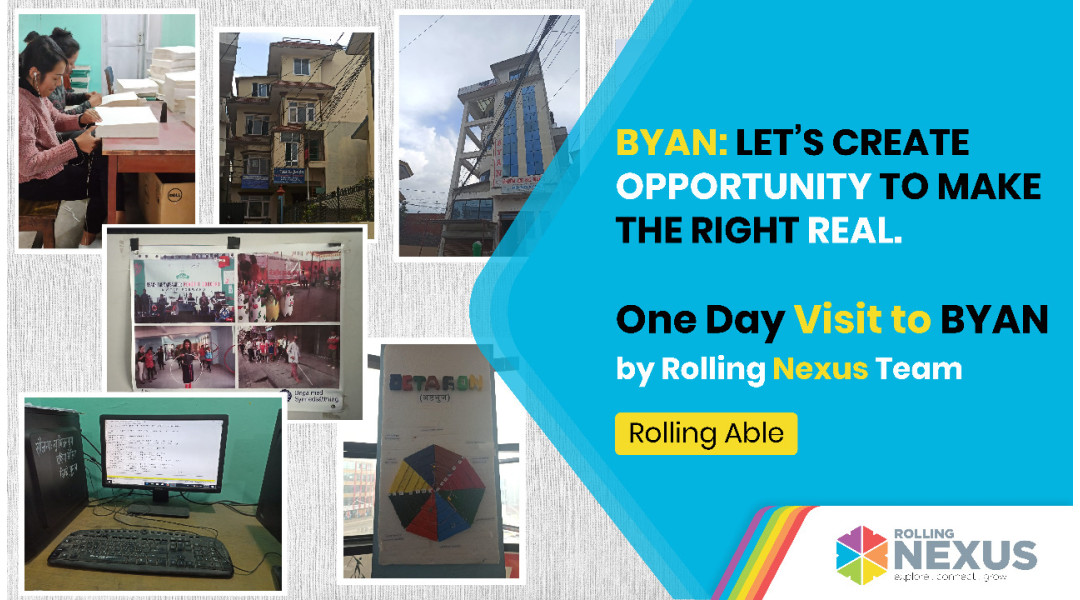 What is BYAN? Association for conjoining the camaraderie of an inclusive society

Pioneer in the formulation, amendment, and implementation of Blind and Partially Sighted (BPS) related legal provisions, and in organising various leadership and capacity-building programs regarding BPS across the whole country, Blind Youth Association Nepal (BYAN) was founded in 2011 and registered with the District Administration Office, Kathmandu in 2012 and affiliated with the Social Welfare Council of Nepal. BYAN is the only sole organisation established by BPS youths of Nepal, especially dedicating its core services for BPS youths aged 18-40. With a strong vision of vesting the BPS youths to enjoy a dignified life in an inclusive society, BYAN has set its nine district chapters covering all 7 provinces. Partnering with several national and international foundations, BYAN has been actively involved in improving the living standards of BPS youths through various blind-friendly activities.

Riveting primarily in the four major sectors, BYAN provides training under four major pillars with an active mission of making the BPS youths self-dependent, self-reliable and capable of tackling everyday challenges. The four sectors include:

In March 2020, Rolling Nexus team made a visit to the BYAN and interacted with the BYAN team. According to Mr. Ram Chandra Gairey, Main Secretary of BYAN, BPS people are estimated to be around 200,000 among which the BPS youths consist of 40% but as per the estimation of BYAN, the population of BPS maybe around 600,000 to 700,000 whereas the number of educated ones is only 5,000. Even though the level of education has boosted amongst the blinds, the unemployment rate for them is very high as the blinds take a certain time in learning the works in the workplace than the normal people and the employers have misdoubted invoking on the adjustment issues for the blind. Translating the educational books into Braille script has been a prominent task in BYAN which has not only bolstered the education system for the blind but also made it easy for the educational institutions to ameliorate networking with the BPS students. The books translated into Braille script are thick and heavy in comparison to the normal book hence, one book has to be adjusted for 3,4 students, he further commented.

Along with the printings of books through a special machine, BYAN organises training, programs, and advocacy for the blind. At the time of the visit to the BYAN office by the Rolling Nexus team, computer training for the blind was being marshalled in the computer hall of the Nepal Association of the Blind (NAB). The computer trainees were given computer training through a distinct methodology. In the present scenario, the blind-friendly technology has assisted blind people to learn and triumph over their disability. The screen-reading software along with speakers, photograph recognition software, etc. have made easy access to the blind to connect with the technology. BYAN has been organising many self-employment generation programmes, employment generation programmes for the youths and in the same way, self-preparation programmes are being held timely.

Regarding the professional sector in the context of the blind, as per the research report, they are proficient at therapy, counselling (due to absence of judgemental decisions), document translation, data collection, etc. Many employers show a keen interest in hiring the blind but lack the recruitment process. The private sector is aligned towards hiring diverse people but are afraid about the competency and skills of the blind. Commitment towards the work, dedication, and fidelity are the reasons that resist the BPS or any disabled persons in any workplace for a longer time. The boon for the employers by hiring BPS and other disabled persons are:

Many people or youths with disabilities regarding BPS desiderate to choose the subjects to study for their career but they are constrained to cherry-pick non-technical subjects like literature rather than technical subjects like computer science. Lack of support system, mandatory laws, enough resource-person, well-equipped facilities, and the positive mindset of the people are the rationale for the inhospitable upbringing of the people with disabilities.

Providing efficient training to the BPS youth along with skill-development, vocational and employment promotion programmes is not only the sole objective of BYAN but providing them the jobs for their self-earning and independence has also been done by BYAN. BYAN provides self-sufficient training and counselling programs for the BPS youths for 1 or 2 months per need basis and the internship process is carried on for 3 months in the organisations where they want to get affiliated with free of cost. When the private sector organisations find the candidates convincing, they hire and provide them the jobs. BYAN has been actively and devotedly involved in linking the BPS youth in an inclusive society through various initiations.

As per the Main Secretary of BYAN, Ram Chandra Gairey, he recommended the private sector organisations to organise employment promotion and capacity building programmes in order to create diversity in the workplace. Job offers should be granted considering the nature of work for the blind people. Reservation should be done for people with disabilities the same as in the government sector. He further added that the best way to support people with disabilities is to let them work in a diversified workplace which escalates the social acceptance and slowly the positive change can occur in the workplace and then the society.

An Interview with Shankar Upadhyaya: Disability is not a barrier for me, it’s a challenge and I’ll tackle transforming it into my forte

In an interview with Shankar Upadhyaya, one of the trainees from BYAN, permanently from Kalikot, shares his personal experiences regarding his disability and the problems he has to face due to the mindset of the people. Currently studying BA 3rd year(as per March 2020)  at Koteshwor Multiple Campus, with a major subject English, Upadhyaya, blind by birth, expresses his grievance about his delay in school education at the age of 12 due to the backwardness of his birthplace. At the time of visiting new locations, new places regarding school, colleges, and offices, the feeling of discrimination and violence arose amongst him.

In terms of his ability and aptitude, Upadhyaya is proficient at public speaking and computer tasks but the strong will to become a VJ has still not faded in him. Regarding many auditions, he was rejected due to the comments that VJ needs to flaunt the physical expression and eye contact which Upadhyaya terms as his weakness. And the same problem was faced by the former seniors, he added. Running the Quiz program named “Kusum'', which engrossed Upadhyaya since childhood, in Parbat FM was appreciated by all but at the beginning, the program producers doubted his ability. Present Secretary of 3 sectors valley program of BYAN, Upadhyaya has been actively involved in BYAN since 2075 BS.

Accessible mindset, understanding the problems of the visually impaired and recruitment by corporate houses extrapolating their capacity level are the best effective measures that can make the visually impaired self-sufficient to be capable without relying on others financially, according to him. He further added that everyone should change their mindset towards positivity to catalyse the inclusive and harmonious society with equitable opportunities.

A short visit but informative, and interaction with the BYAN members by Rolling Nexus team, aims at delineating the programs organised by BYAN for hoisting the living standards of BPS youths and the different challenges faced by BPS youths to belong in an inclusive society and the expectations of them towards corporate houses.