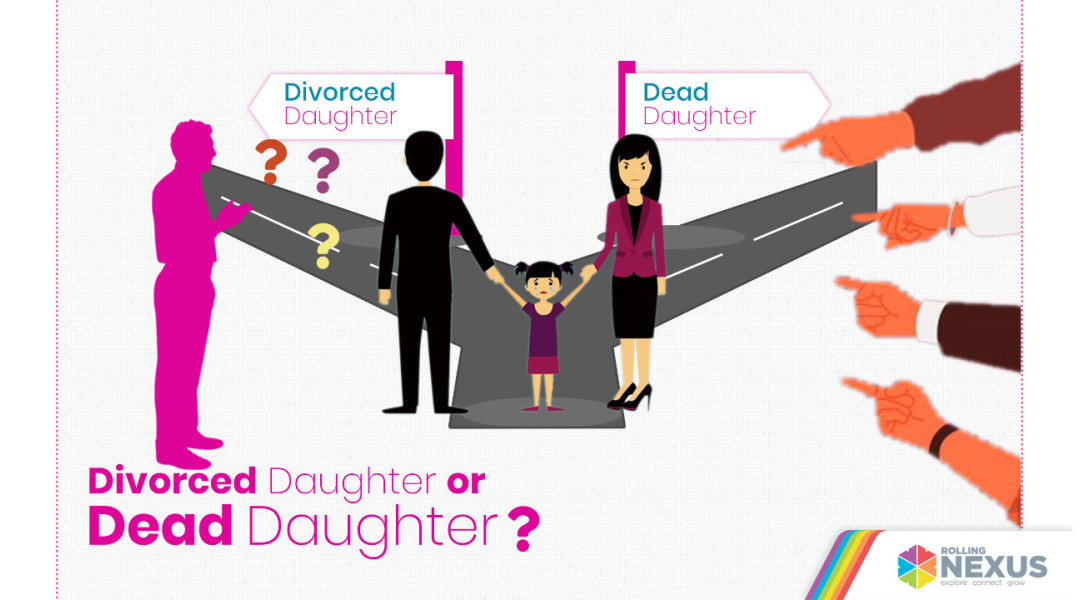 Who do you think is better? A divorced daughter or a dead one?

Upon recalling her memories, she feels frightened as she contemplates possible nightmares had her parents decided to end things with her.

On the terrace of her parent’s home, she is holding a cup of tea which she thinks will taste nicer as she takes sips at it. Her daughter is asleep in a crib at the side of her. She feels assured, sheltered and contended, something she could never experience at her in laws’.

Her life history passed across her face. December 21, 2013, she got hitched, it was an arranged marriage. She had aspirations and desires but they did not survive the sexual, psychological and emotional abuse she faced from her husband and the in-laws right after the wedding.

Meanwhile, she was with a child and assumed that this would alternate the typical feeling of her husband and in-laws about her. But, unfortunately, it all remained the same. She dared and took a risk to leave for her parents’ house to focus on delivering the baby who hadn’t done anything wrong but still would get caught up in the mess.

She started getting depressed. Her insecure self would struggle to sleep for nights. With her daughter being born, she would smile with gratefulness for having a reason to stay. Nevertheless, she persisted despite deteriorating with each day.

In her head, she would play questions about her future and why everything that did happen to her happened to her. She wanted to know if she was at fault for all of it. Society didn’t help to lessen her pain but rather amplified her anguish by interrogating her for living at her parents’ house.

Thankfully enough, she had her parents’ support. This helped in making it slightly easier for her to fight her battles. Her parents continuously supported her. And that doesn’t mean she was acting like a child nor was she taking any rash decisions. She was exhausted, she was in despair and nobody could imagine walking in her shoes.

Physical and mental abuse takes a lot of toll on people. It needs to be taken seriously. People expect women to tolerate abuse because they cannot comprehend the impact of abuse on those women’s lives. Some people who have been abused lose the very joy of living life. The happiest of people go broken. The happiest of a family become shattered. It can happen to any of us. While life is unpredictable, parents’ love for their daughters is genuine and certain. Thus, parents’ love and care exceed all forms of relationships.

Parents should never rob their daughter off of support. It puts their daughter in risky situations otherwise. The fight with the court and the custody of children can be very demanding and tiring if the daughters don’t have their parents to rely on for emotional difficulties. Parents should lend a hand to guide their daughter just like how they used to when she was a little girl. They can become her meteor and allow her some space to gradually come out of this tough stage of her life that she did not have the liberty to handpick herself.

She is an accomplished single mother today. An esteemed businesswoman and a confidant to numerous people. She appreciates her parents and family for choosing a divorced daughter over a dead one.

Divorce is not a new thing. It is not something to be ashamed of. People deliberately do not take this journey if there were other ways for things to get better. If your options are divorce or choosing to walk towards whatever worse that awaits then always go for divorce. If living together with their spouse can be life-threatening for someone then separation should be normalized and a basic human right. Parents and family should not be apologetic for having a divorced daughter at home.

Worrying about what will society say is absurd when your daughter is being abused by her in-laws’. Where was the same society when she was hurting, facing many adversities and deprived of food? Your priority should be being there for your daughter and not pleasing society.

You have to keep your daughter safe from harm. Sadly, society won't hold itself accountable if anything were to happen to your daughter. As parents, you have to understand that she has a right to life and happiness.

Divorce is not something worse that could happen. Divorce does involve hardships and is the ending to relationships but it also can be the beginning of endless possibilities. Going through a divorce is freeing for so many people. You realise that the world is your oyster. Divorce is the end of a phase in your life and not the end of your life.

In the course of a divorce, you are quite literally at a crossroad, and you can utilise this time to create something wonderful out of your life. You can seek out opportunities that are worthwhile and make efforts in living a happy life. There can be other reasons for divorce other than unhappy marriage life. Whatever they may be, they are valid. So you should grasp that and support her in her decision. You aren't aware of what she has gone through. You have no idea how defeated she feels. Try listening to her. Don't give in to the loud noises of societies. Focus on saving your daughter.

Remember how much you have loved her ever since she came into your life. She is the same princess she once was. Let her know that you love her and you will always be there for her.

Welcome the queen of your hearts with open arms and an open mind because, to answer the question on top, divorced daughters are far better than dead daughters.